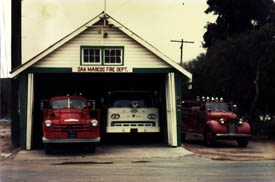 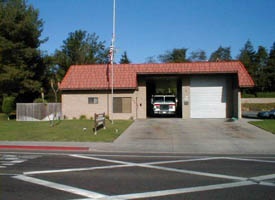 In 1980, the department built its second station on South Rancho Santa Fe Road in the area of Lake San Marcos.  In addition, the department had now increased its equipment fleet to three fire engines, three wildland engines and a rescue squad.  By the mid 1980s, the district continued to see rapid growth as a result of the development occurring in the City of San Marcos. As such, by the mid 1980s, the department added additional full time staffing. In 1987, the district became a subsidiary district to the City of San Marcos.  The City of San Marcos provided the much needed funding mechanisms and management required to assure that the fire department would keep pace with the growth of the City and  surrounding district lands. The City also added paramedic service to the community in 1988. This program has expanded over time. Today, paramedics staff every on duty fire engine and ambulance.

In the 1990s, the department built its third fire station on the east side of town in the Woodland Park neighborhood. Due to the high demands for service from the community, a ladder truck company was also added in 1993 and the paid-call firefighter force was phased out and replaced with full time fire personnel.

With the coming of 2000, the City and District were experiencing unprecedented growth.  Both Palomar College and California State University San Marcos were growing rapidly.  The community was experiencing the addition of large master planned communities, commercial/retail centers, office complexes and multiple industrial parks. In 2008, the department built its fourth station in the San Elijo Hills area to accommodate this growth.  In 2015, the department experienced an unprecedented increase in annual emergency call volume. This increase, along with City and District area growth, is a driving force behind planning efforts to ensure that the most appropriate and efficient levels of services are maintained.