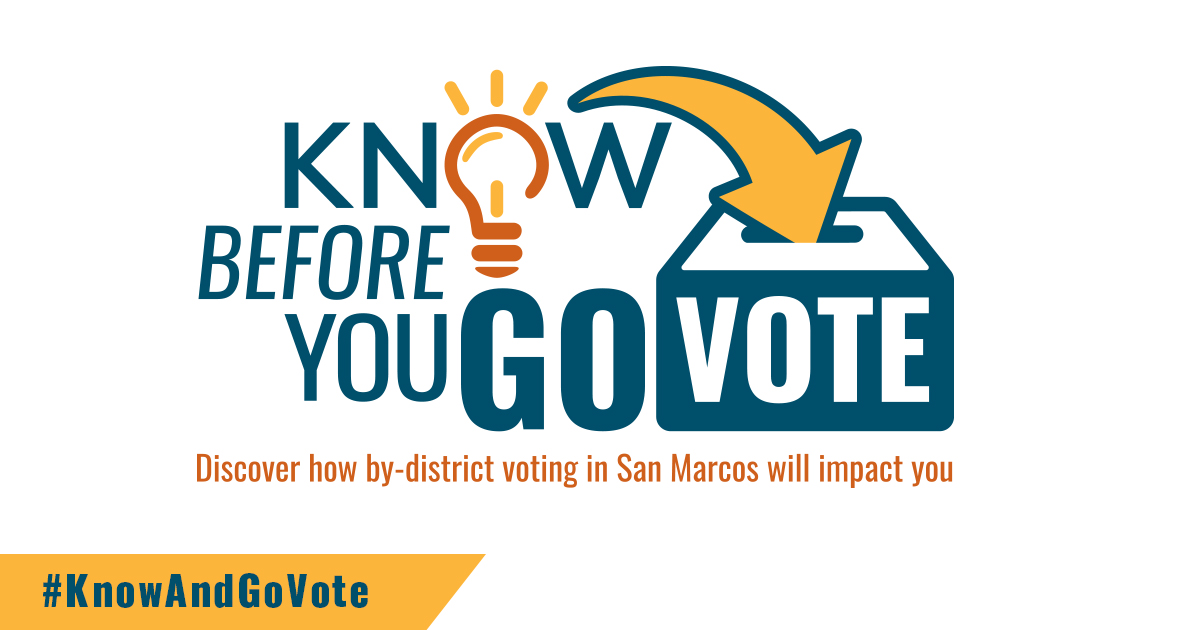 San Marcos consolidates its General Municipal Elections with the Statewide General Elections held on the first Tuesday after the first Monday in November of even-numbered years.

During this election, only residents from District 1 and District 2, as determined by their voting address, will be selecting a council member. Districts 3 and 4 will then vote for council members during the 2020 election. (City of San Marcos District Map)

The City of San Marcos is a Charter City governed by a five-member City Council consisting of a Mayor and four (4) Council Members from four (4) districts. The term of office for each member is four years with staggered terms. There is a limit of three consecutive terms for each position.

The deadline to *register to vote in any election is 15 days prior to the election. Registration forms are available in the City Clerk Department, 1 Civic Center Drive, as well as online with the County of San Diego Registrar of Voters or the California Secretary of State. *Any changes to address, party affiliation and name require a re-registration.

The City Clerk serves as the election official and is responsible for the issuance of nomination papers, placing city measures on the ballot and conducting municipal elections in accordance with the City of San Marcos Municipal Code, the Elections Code, and the Political Reform Act of 1974.

In order to qualify as a candidate for Mayor or a member of the City Council, an individual must be a registered voter and a resident of the City of San Marcos and the district they want to represent.  The position of mayor is voted at-large.

Signs placed on a public or private property that endanger the safety of persons or property or that interfere with either pedestrian or vehicular sight distance will be immediately removed by City staff and the candidate will be billed for the cost of removal.

Signs on public property that do not pose an immediate hazard may be removed by City employees if, after notice, the responsible party has not removed them. Public right-of-way, in most cases, extends 10 feet from the curb face or a public street. Center islands are part of the public right-of-way. A private property owner may remove signs at any time without advance notice.

Political signs are prohibited from being placed on public property, which includes the following:

From rights-of-way and other public property:
Signs may be removed on sight. No advance warning or notice is required if a hazard exists. Reasonable effort will be made to contact campaign headquarters or another responsible party, if known, to advise of City's action or provide 72-hour notice to remove the sign. Signs returned only on demand and destroyed 30 days following removal if unclaimed. Costs incurred for sign removal by City after 72-hour notice shall be billed to the candidate.

From private property:
A Notice of Violation is issued to the responsible party. Reasonable compliance time frame is given, along with an explanation of specific code provisions violated. If cooperation is not secured, a citation may be issued.