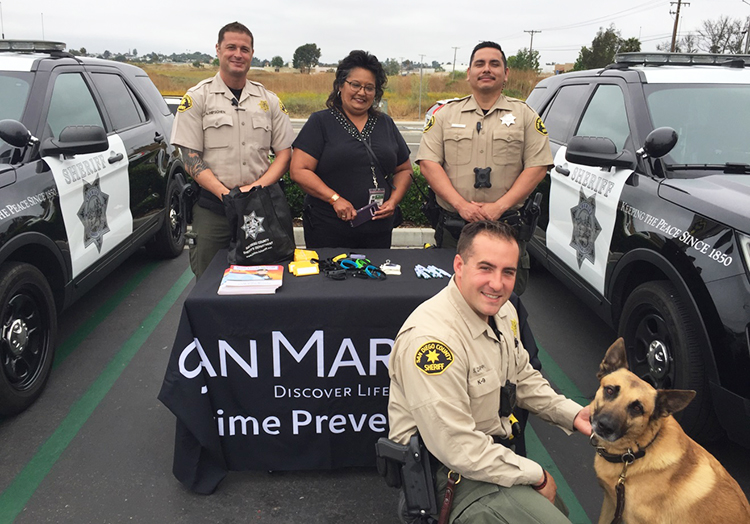 San Marcos has some of the lowest crime rates among the 18 incorporated cities in San Diego County, according to new data from the San Diego Association of Governments (SANDAG).

“Part of our success is thanks to more intelligence-led policing, which means relying on analytics to catch habitual criminals,” explained San Diego County Sheriff Captain Dave Brown, who oversees the San Marcos station.

Like many cities, San Marcos contracts its law enforcement services from the county—but Captain Brown points out that San Marcos has done an exceptional job of investing resources into its public safety in recent years.

“For example, I now have two analysts who leverage computer technology to link crimes, which has given us tremendously valuable insights, ”he said, adding that he’s also recently been able to double the number of officers at San Marcos schools.

As a case in point, about a year ago San Marcos saw a rash of business break-ins, mostly at mom-and-pop shops. By working with deputies, the city team identified other small businesses that were likely targets.

“This city team took the time to proactively visit these businesses, alert them of the crime spree, and give them tips on how to improve security,” Captain Brown said.

It seems those businesses owners were listening, too. Another rash of similar burglaries broke out a couple months ago. “But this time, all the burglars got was about twenty dollars in quarters and a bag of chips.”

That’s music to the ears of Ronie Martinez, who is part of the City’s crime prevention team, as public safety coordinator. She’s served San Marcos for 30 years, and though the community has changed dramatically, she said one key message has not: “Report everything to law enforcement.”

“Even if was just your garden hose that was stolen, report it,” she said. “You may learn that we’ve had six garden hoses stolen this week, and now we have a series. Having all the pieces helps us see the big picture.”

Martinez also wants the community to know that San Marcos offers all sorts of free crime prevention services, which can be seen on the Crime Prevention page of the City's website. She encourages everyone to take advantage, because ultimately, it will make for a safer San Marcos.

“Keeping our crime rates low is a communitywide effort,” she says. “We’re all in this together.”

For more information about the City’s crime prevention efforts, please contact Ronie Martinez via email or by phone at (760) 744-1050, ext 3111. You can view SANDAG’s full crime report here.