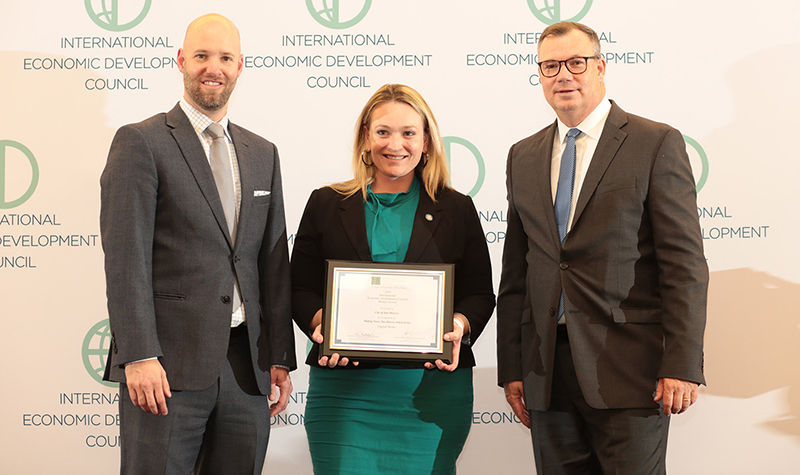 The International Economic Development Council (IEDC) — the world’s largest organization of its kind — has honored the City of San Marcos with a prestigious award for an article series it produced to showcase its many economic development strongpoints.

The City won an Excellence in Economic Development Award for 17 news articles, which to date have earned more than 40 media placements. And according to city data, the articles have averaged a social media engagement rate of more than 30%, which is well above the 9% rate government agencies typically see, according to Sprout Social.

“The data tells us these stories are not only reaching the right audiences, they’re also resonating,” said Economic Development Manager Tess Sangster, who formally accepted the award on Oct. 15 during IEDC’s annual conference in Indianapolis, IN.

IEDC's awards are judged by a diverse panel of economic and community developers from around the world, and this year’s competition drew more than 400 submissions from 12 countries.

“The recipients of IEDC’s Excellence in Economic Development awards represent the very best of economic development and exemplify the ingenuity, integrity, and leadership that our profession strives for each and every day,” said 2019 IEDC Board Chair, Tracye McDaniel. “We’re honored to recognize more than 100 communities for their excellent work.”

Specifically, the City was lauded for going beyond standard press releases — and actually reporting its own economic development news. For example, one article shared new data to spotlight how the manufacturing industry is booming in San Marcos. Another article explored how the local food and beverage scene is gaining steam, which was also backed with relevant numbers.

“By telling our own story in a credible and engaging way, we have inspired confidence and generated interest,” Sangster said. “Simply put, these articles have helped put our City’s economic development efforts on the map.”